The Glass Half Empty cont

When painters look at the works of other artists they pay particular attention to any aspects they find to be structurally distinct. These anomalies usually provide the key to understanding the nature of the artist's concerns:his concept. English artist Henry Moore for example, scooped deep concavities into the surfaces of his sculptures and punched holes through their volumes. These "Innovations" are celebrated for heightening our awareness and appreciation of empty space. In actuality,Moore's true innovation was to use the artists' age-old manipulation of the interplay of empty and full in so simplified a manner that even critics peering over the tops of deep-dish martinis couldn't miss the point.I've diagrammed the structures of two pictures{the Rembrandt and Pyle below} illustrating the carefully orchestrated interplay of forms and hollows. In both a central hole is driven through the space from front to back hollowing out the forms with which the space coexists in a dovetailing, Yin-Yang arrangement that would satisfy the most orthodox Taoist. In addition both Rembrandt and Pyle superimposed beautiful 2 dimensional patterns on top of their virtual 3 dimensional organizations. Modern artists are frequently granted paternity for the innovations of others; often because of the greater salience effected by a clumsy ,phthisic adaptation of the original source.Jackson Pollack for example studied with the Mexican Muralist David Alfaro Siquieros whose work exhibits the drips and dramatic application of paint later credited to Pollack. Unlike Siquieros whose masterful control enabled him to harness the inherent dynamism of the technique to create works of volcanic force, Pollack could merely ape the superficial aspects of his teacher's approach.Thomas Hart Benton ,another of Pollack's teachers recalled late night phone calls from him ,seeking his imprimatur for his purloined scribbles. Self assessment of his own artistic integrity doubtlessly led to pollack's perpetual potation.
Posted by wolfestudio.com at 10:55 PM No comments:

The Glass Half Empty 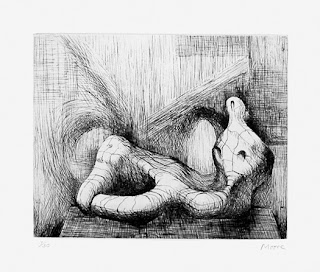 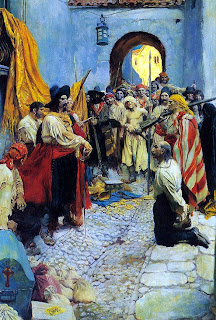 Posted by wolfestudio.com at 10:15 PM No comments:

In 1987 President Reagan arranged for the remains of Black Explorer Matthew Henson and his wife to be buried in Arlington National Cemetery right along side the grave of his fellow explorer:Robert Peary. This honor may have given a sense of over-due justice and closure to many present but Robert Peary would not have been one of them . Despite his new neighbor's decades as a faithful travel companion through more thick than thin, following their ultimate triumph :arriving at the North Pole,Peary snubbed Henson and did all in his power to minimize his share of the laurels, even denying him membership in the Explorers Club of which he was president. Henson was heart sick but there was historic precedence . Lewis and Clark brought Clark's slave York with them on their trek to the Pacific. Upon returning to the East all in the party received generous land grants and official positions, except York. His only aide de memoire of the trip was his frostbitten penis{a malady that occurred while traversing the aptly named Bitteroot Mts.}Returned to slave status York became so"restive and sulky" that Clark found it necessary to "trounce " him. En route to their rendezvous with destiny both Henson and Peary sired Eskimo sons . It's fascinating to speculate about the genesis of this imbroglio. Peter Fruechen would doubtless dismiss this as an awkward propitiating act of sexual diplomacy by the boys, a doffing of their fur hats to Eskimo etiquette. I, agreeing with Zorba that "God hates half a devil ten times more than an archdevil" suspect our two itinerant Onans were wantonly answering the call of the wild ,drinking copious amounts of whatever eskimos have found to be fermentable {* Peary did eventually die from Cirrhosis} and enjoying the liberating effects of being off the map. Oddly , the relative egalitarianism enjoyed by both York and Henson while in the wilds ended at the gates of the city. Somehow against the backdrop of a different habitat Chameleon-like their aspect was perceived to change.
Posted by wolfestudio.com at 10:28 PM No comments: 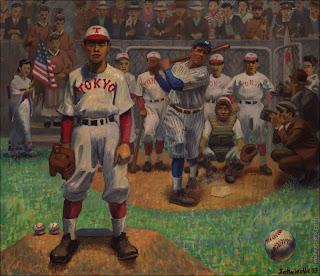 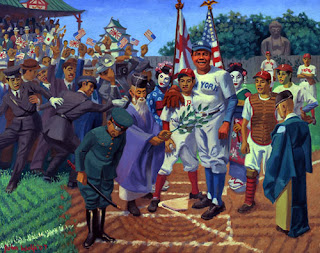 Posted by wolfestudio.com at 10:58 PM No comments:

No culture has assigned a higher value to aesthetics than that fashioned by the Japanese. Even when committing ritual suicide {Seppuku ,Hara Kiri} you ran the risk of adding "Philistine" to whatever original infraction got you into your present pickle if your performance did not include preparations guaranteeing that your soon to be disemboweled and beheaded remains fell into a balanced, tasteful and interesting assemblage. An extraordinary sensuous refinement is evident in all the Japanese arts. I particularly favor the Ukiyoe prints which are studies in feeling and parsimonious expression. The Culture that produced a people capable of such delicately nuanced sensibilities went into decline in the late 1860s when power was "restored" to a central government under the Mejii emperor{See Tom Cruise-Last Samurai} and a "Life for Art's Sake" philosophy was supplanted by industrialization and militarism. However, artistic temperament was a deeply ingrained national characteristic and much of the old sensibility still remained when the brawling, stogie chomping, beerified Babe arrived in Yokohama Harbor aboard The Empress of Japan. A major theme explored in my work is just such clashes of culture. St. Mary's Industrial School for Boys to which truancy and petty crime had earned Ruth a berth for most of his youth had not provided him with many opportunities to explore his sensitive side. In many ways Ruth was the quintessential "Ugly American" and one would expect that The Babe's bawdy, hyper- extroverted style would have horrified a people as standoffish and reserved as the Japanese. It was Nov. 2, 1934; Ruth had just ended his relationship with The NY Yankees and had joined an All American-AllStar team touring the Orient along with Lou Gehrig ,Jimmy Foxx , Lefty Gomez and others. Tens of thousands of Japanese brought traffic to a standstill attempting to see the Babe as he road down the Ginza in an open touring car waving Old Glory in one hand and the Rising Sun in the other. The frenzied crush was such that 600 people needed to be hospitalized .Record crowds packed the two stadiums where the American team played college and Japanese pro teams. Ruth was a big hit in Japan and before departing amended the Confucian moral code when he told Japanese reporters "There are no bad people among lovers of baseball."
Posted by wolfestudio.com at 8:27 PM No comments:

castro throws out the first pitch 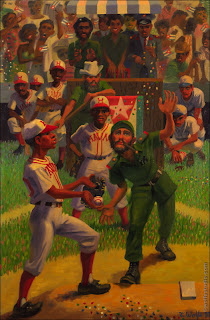 Posted by wolfestudio.com at 10:27 PM No comments: 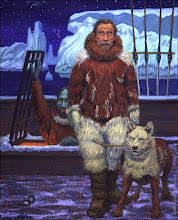 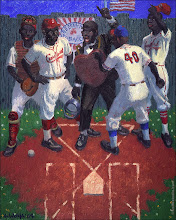